Performing arts patrons might be more loyal than ever, but their expectations on how to show their patron loyalty are shifting. The modern subscription model is changing to meet the flexibility needs that consumers have grown used to from the other modes of entertainment that dominate their everyday life such as streaming services and online retailers.

The budgeting challenges inherent to the nonprofit arts world make it difficult to compete with how giants like Amazon and Netflix sell to and upsell their customers. Still, some arts organisations are using this as an opportunity to think about how they can leverage technology to maximise revenues from patrons they already have coming in the door.

Two River Theater noticed how these trends were affecting their audience base. The Red Bank, New Jersey organisation that’s just a train ride away from Broadway kicked off a long-term expansion project to allow more space for the community to engage with the theatre beyond seeing shows. This physical expansion led Two River’s staff to examine ways to communicate the sophistication of their building, productions and brand into their digital presence. One key piece of this was making sure the theatre was maximising revenues on each patron it was engaging with online. With these ideas in mind, the team developed two new models: multibuy upsells and donation add-ons.

Method 1: Buy more and save

Outside of the arts, it’s easy to spend money online and even easier to spend more of it, Two River’s Director of Marketing Courtney Schroeder said. Arts organisations need to look to big retailers for how to model their purchase paths because that is what patrons compare them to. “Unfortunately, being nonprofit theatres doesn’t provide us a free pass. We need to make sure that we’re being competitive and that we’re doing our best to inch closer and closer to providing our patrons with the same experience,” Schroeder said.

Two River noticed a 3.5% decrease in subscriptions over the previous three seasons. Though this pointed to the greater industry challenge, they also saw a need to expand their efforts to upsell patrons from single to multi-ticket buyers from just at the box office and over the phone to online.

Using Spektrix upsell features, Two River launched a new step in their online checkout flow called “Buy More and Save.” Now, online ticket buyers originally just buying tickets for one event get a message prompting them to add two more shows to their cart to save 25% on tickets. The discount applies automatically as soon as those shows are added, making them subscribers while also giving patrons the flexibility to choose their own dates and seats. 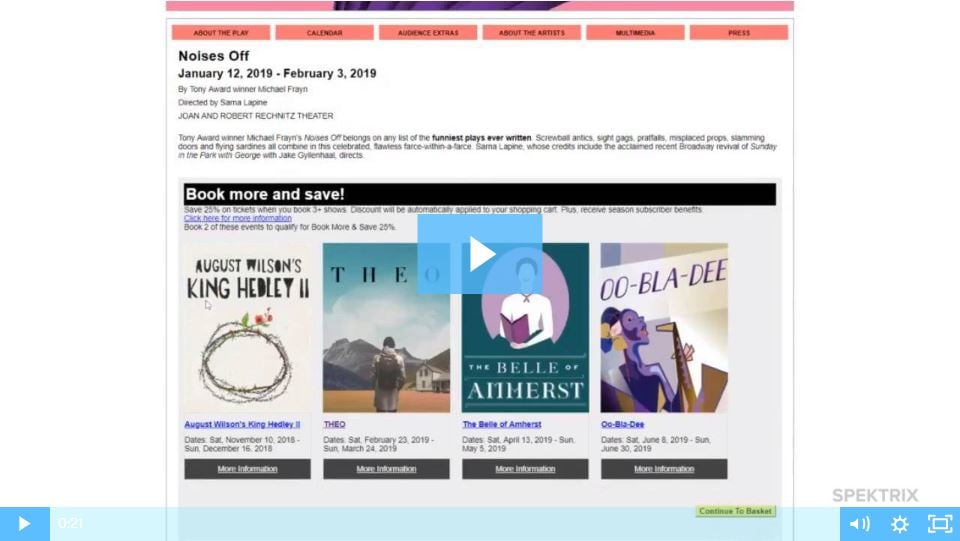 Two River now has more than 230 subscribers who have booked through this programme for a total of $33,000-plus in revenue. “We’re definitely seeing more people interested in this type of model,” Schroeder said. “We’re also seeing that this model is helping us to drive new subscribers and also get some renewals too.”

The programme has proved to be a better way to sell subscriptions not just online, but in-person and on the phone. For the past two seasons since introducing “Buy More and Save,” Two River Theater has transformed their total number of season subscribers from steadily in decline to increasing each year.

Two River applied the same line of thinking to their online donation asks. In prior seasons, they asked for add-on donations via a link in the checkout that redirected patrons to a separate page. Now, with the help of Spektrix, add-on donations are an integral part of the checkout process with pre-populating donation amounts and customized messages. Over a year, they experimented with three different asks between $10 to support their annual arts fundraising and $25 in honor of their 25th season. The most successful one? A $15 ask to sponsor student matinee tickets that happened during the holidays, which had an average donation of $18.

Combining all the asks in a one-year period, Two River quadrupled their number of donors under $100 resulting in more than $4,000 in added contributed income. This not only generated additional revenue, but gave them a whole new channel for identifying new donors and moving them up the funnel. “Our goal is to identify patrons from this new list that have the potential to give more and cultivate them accordingly,” Schroeder said.

These new upsells made for some big wins during the season they went live, but even more crucially, they are laying the groundwork for sustained growth in the seasons to come. Like Two River’s physical expansion, their new take on online upsells is opening up the organisation for more people to engage with it on the level that works best for them.