On 9 December 2020,  around 200 Spektrix users from the UK, Ireland, the US and Canada gathered online to discuss different approaches to streaming digital culture and monetising content online. Matt from Spektrix gave a whistlestop tour of client success, before two user organisations – Opera North in Leeds and MCC Theater in New York – talked about their very different approaches to moving participation and performance online.

Rather than share a recording of the session, we've captured the key learnings here in a format which you can browse and explore at leisure.

Matt opened the session with some evidence showing this conversation isn’t over yet:

In the US, JCA Arts has found:

While in the UK & Ireland, Culture Restart has found:

Next came a whistlestop tour of success from across our user community:

Boise Philharmonic in Idaho (US) has created a new subscription model, offering access to their ‘digital stage’ with 24 hour access to performances.

The Barbican Centre in London (UK) began showing Cinema on Demand back in July, creating a bespoke platform built around Spektrix. This ensures that all data remains in Spektrix, and that the website communicates with customer logins to check the validity of tickets. More recently they’ve added live streaming alongside their cinema programme, and found an audience that hugely exceeds the numbers they’d expect for in-person events.

Creation Theatre Company in Oxford (UK) recreated a production of ‘The Tempest’ from 2019 but transferred it entirely onto Zoom, with actors and audience members dialling in from home. They called on the audience to participate in the creation of a virtual storm by clapping, clicking and squawking like birds. The production reached at least as many people as the earlier live production, but across a much wider geographical spread. Those bookers have proven to be a vital source of donations and repeat ticket sales since April, emphasising the importance of linking online sales with your CRM system to maintain and build relationships with new digital supporters. Creation are now exploring augmented reality and a bespoke streaming platform - and they’ve created case studies and a Digital Toolkit for others in the industry.

Read ‘The most important people in the Zoom room’ by Lucy Askew, Chief Executive of Creation Theatre, on ArtsProfessional 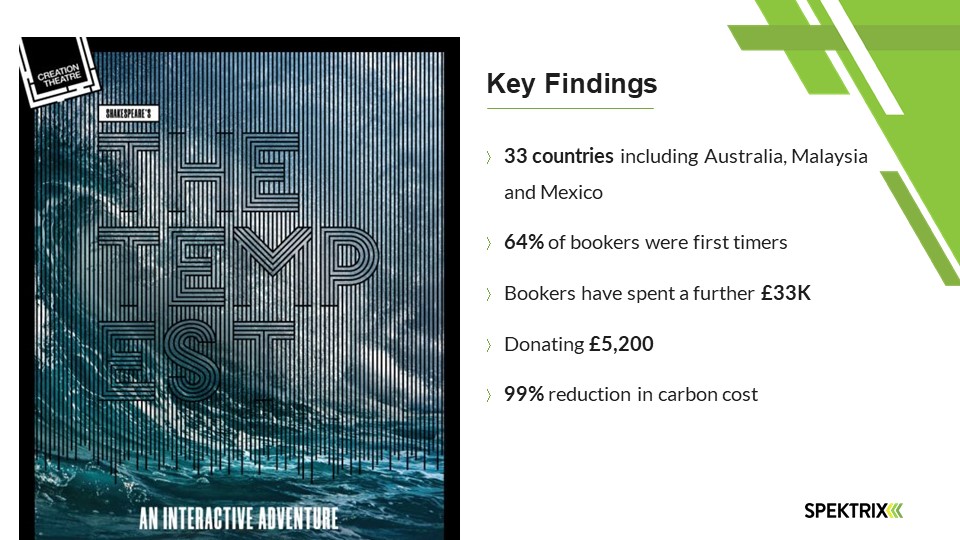 The International Festival of Arts and Ideas in Connecticut (US) pivoted their programme early in 2020, and now offer a range of virtual and physically distanced events including art experiences, cellphone walking tours and more to engage with artists and their community.

Chichester Festival Theatre (UK) produced Sarah Kane’s ‘Crave’ in the spring as their first socially distanced and live streamed event. They found there was a lot to learn in working with a film crew and factoring in camera positions, and found that - contrary to the assumptions of their audience - overheads were just as high for virtual events as for live performance. In their first ‘pay what you can’ model, 32% of audience members chose to pay more than the minimum ticket price. For more recent events, after actively communicating about the costs involved in digital production, they’ve seen that number rise to 51%. To boost sales still further - and to recognise the different needs of single viewers and households - they’ve added a ‘supper and a show’ package, with recipe kits delivered to your door, and changed their donation prompts to encourage ticket holders to contribute more if they plan to ‘share a sofa.’

The Embassy Theatre in Skegness (UK) is one of several venues that has been acting as a virtual ticket agency, promoting and selling for a live stream of ‘That’ll Be The Day’, offering the chance to download live and interactive segments, and receiving a commission for the tickets they sell. This event has now taken place.

Barter Theater in Virginia (US) had numerous school groups booked to tour their venue during 2020. They produced a virtual tour for these groups, and also offered it as an add-on for anybody subscribing to their on demand content.

Educate audiences on the costs of producing digital content

Break the assumption that the online space provides something for nothing

Opera North is a national opera company, creating extraordinary experiences everyday. As well as a full scale touring programme, they curate the programme at the Howard Assembly Rooms in Leeds and have just launched a new streaming platform; this month they’re opening a new digital sound walk through the city.

Opera North’s extensive education programme aims to inspire and enhance wellbeing in communities through arts participation and performance. Pre-Covid, one of their lifelong learning projects was SingON, which combats social isolation among older people with five singing groups in church halls and town halls. Those groups involved almost 200 members and retained a local feel, with no auditions or experience required.

Lockdown put an end to in-person sessions - but the education team quickly hit on the possibility of leading the activity online. Within a week, they’d called every participant to help them understand how to access online events and, in some cases, how to create an email address. Their efforts worked and although it wasn’t quite as good as being in a room together - participants couldn’t hear one another over Zoom - the online sessions kept the community going throughout a difficult spring. 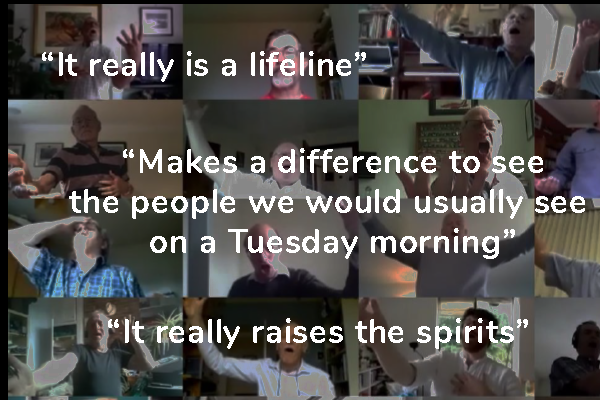 With the long summer break approaching and Covid-19 still limited social contact, the team was concerned about loneliness - both in the SingON communities and further afield, among older people who wouldn’t normally be able to access this local Yorkshire project. Wondering if they might attract another 200 members, they launched From Couch to Chorus, adapting the usual charge of £6 per session into a pay as you feel model with donation prompts in a series of pre-/post-session and survey emails. Astonishingly, they attracted over 2000 members, more than half of whom were entirely new to Opera North. What's more, the income target was exceeded by half again, with two thirds of participants making a donation, and 80% were valuable first time donors.

What’s next? A Festive Edition is underway now, adapted in response to feedback to include an evening rehearsal session and a more advanced group. FAQs have been added to the website, and they’ve cut post-session emails to reduce staff time. And they’ve retained the same number of participants, and already exceeded donations from the summer.

With all participants’ engagement and donation activity recorded in Spektrix, the development team is now funnel planning while marketing staff make plans to increase the diversity of participants. However soon in-person sessions can resume, the digital programme will remain a regular feature of their lifelong learning and audience development strategies.

MCC  Theater is one of America’s leading off-Broadway producing companies, based in Hell’s Kitchen in New York.

Back in March, Nikki received an email from her gym inviting her to book a digital classes, and her brain turned that idea into the concept of a digital subscription for MCC. She took the idea to a senior staff meeting, but at that point it wasn't a priority - after all, the pandemic was only going to last a few weeks.

That knowledge inspired them to start planning what was needed to make it work.

Naturally, different teams had differing questions and concerns. Development wanted to make sure that patrons still had exclusive level content built into their subscriptions. Education asked about student matinees and whether or not a schools version of the portal was viable. Artistic leads wondered how they’d produce more content, in less time, with higher production values, in an entirely new format; and General Management wondered how they'd contract the actors. Together they created a Subscription Dream Team to find a model that embraced the current reality of lockdown with the hope of a return to live events.

The marketing campaign drew on the emotional connections between audiences and the theatre, and the gains and luxuries of watching from home - no need to silence your cellphones, and shirts, shoes, clothes optional! 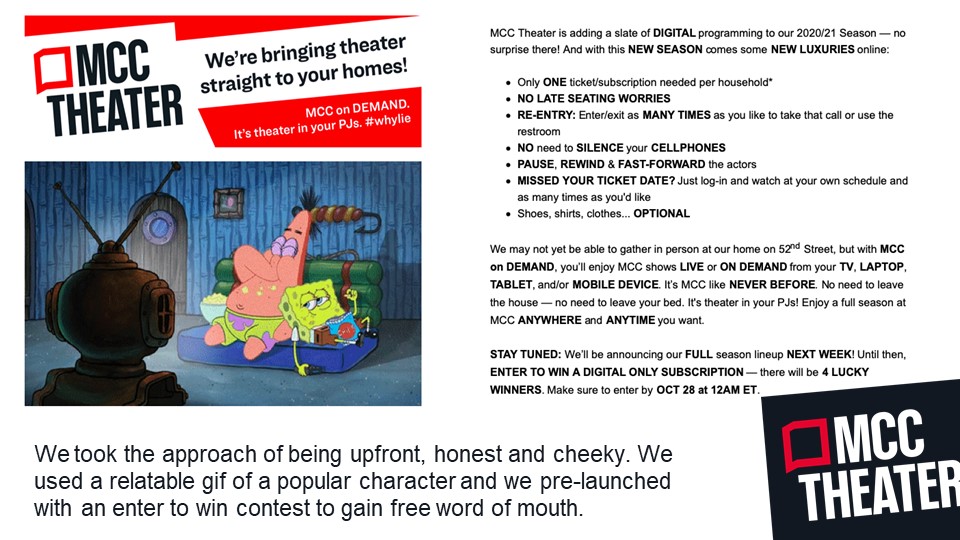 By June the team was ready to talk to Substrakt about setting up MCC On Demand. They didn’t want messy links or embeds on their website, but a fully fledged integration with Spektrix. They set clear priorities: the site should host video, recognise customers’ existing Spektrix logins, allow single show rentals, and speak to Spektrix immediately to activate accounts at any time of day or night. In the space of six weeks that became a reality - and in addition, all events are closed captioned, can link to a TV screen, and provide easy prompts to watch, rent or subscribe, depending on the customer’s status.

What’s next? The goals and outlook for the on demand programme are different from those for live events. It’s a new audience, buying into a new offering, and although numbers so far have been lower than for a live season, it’s a base they’re still actively building. They’ve built a following of 17,000 new subscribers on YouTube, where they hosted a major fundraising gala, and have boosted viewings with automated notifications to those subscribers.

The next big challenge for 2021 is a fully realised virtual musical, live streamed direct from the stage. “We’re excited, we’re stressed, and we’re going to figure it out,” concluded Nikki - a statement that could sum up the whole sector, as we step into this brave new world of digital performance.

Discover our year-round programme of live and online events