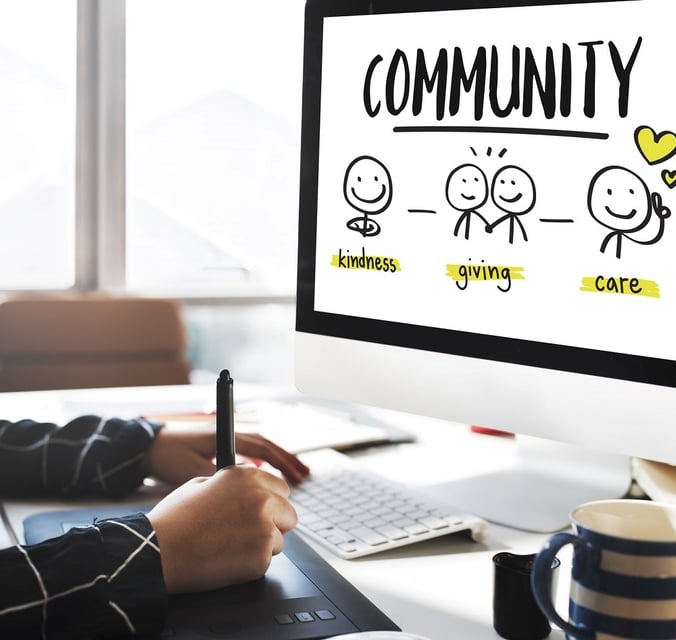 The current fundraising landscape is extremely competitive. Most nonprofits rely on 30-60% of their annual operating budgets to come from donations. As a result, potential visitors are accustomed to seeing ‘Support Us’ pages on websites, and are more used to being asked as part of their purchase to contribute towards an organisation’s running costs or capital projects.

Given this climate, how can you stand out from the crowd with your fundraising, making sure that people aren’t just aware of your campaigns, but are happy to get involved?

Having a ‘Support Us’ page on your site is fast becoming the norm, because how else are your customers going to know that you need their help? You should be considering what else you can do to proactively encourage people to support you.

We’ll look at some key things to consider while creating your campaigns, and have highlighted a few great examples of organisations who are coming up with creative and engaging ways to both structure their fundraising, and communicate with their customers and donors. We especially like how, in each example, the organisations have clearly thought hard about the type of relationship they hope to build with their donors, and by doing so are laying strong foundations for their futures.

The Arcola Theatre is marking its 15th anniversary as a venue with an ambitious 15 for 15 campaign, in which they’ve laid out 15 goals for the future and their plans to bring those goals to life. 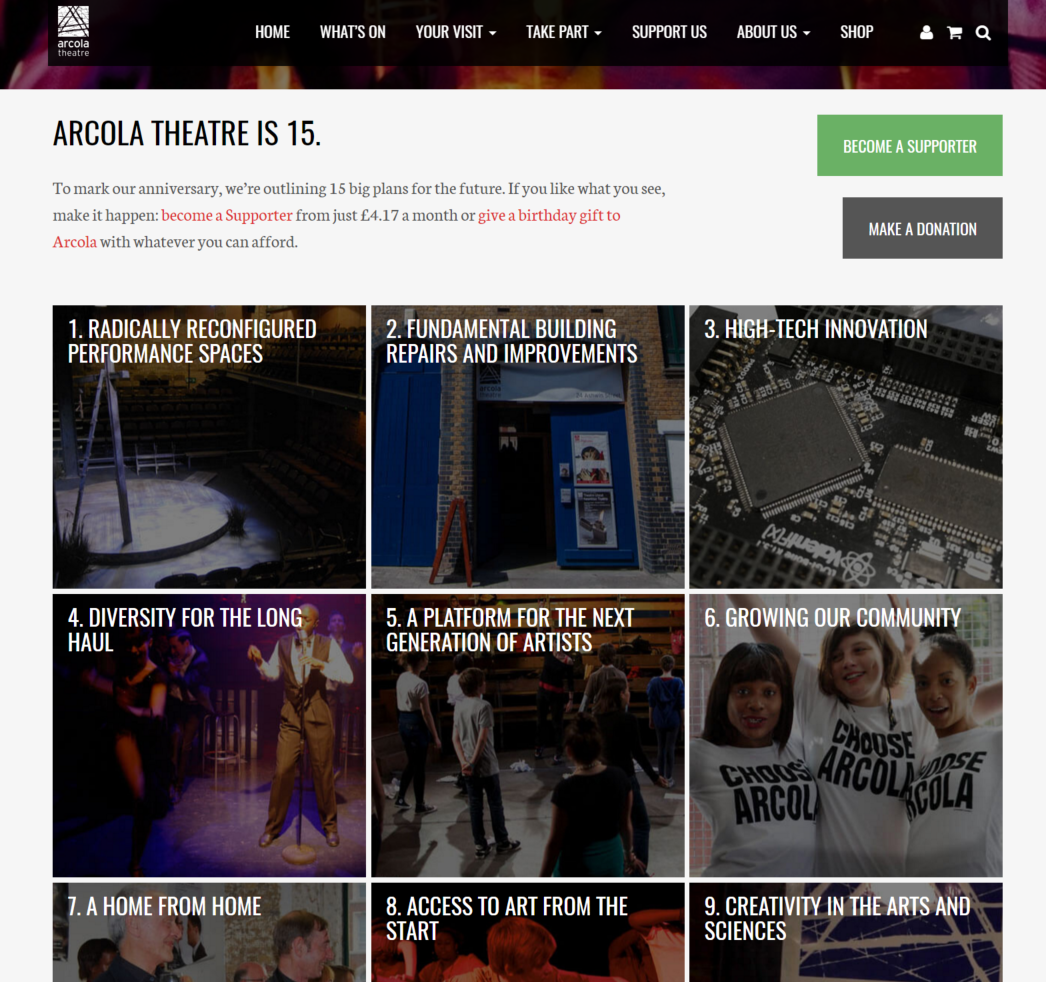 Inspired by political campaigns, this was a deliberate attempt to move away from traditional arts fundraising that often looks to the past. Instead they are focusing on optimistic and achievable goals for future work, projects and infrastructure development. Potential donors are able to explore a range of proposals and engage with whichever strands most appeal to them personally, fostering a connection between them and the theatre's future plans.

All donations are processed within Spektrix using the standard Donations iframe, allowing easy reporting, and the capture of useful customer data.

Another great example of encouraging donors to build a relationship with an organisation is the Mercury Rising campaign, by the Mercury Theatre in Colchester. They’ve built a capital campaign to raise funds to go towards the cost of extensive renovations and additions to their current buildings. It allows donors to choose from various low-cost capital items using an eye-catching interactive map on their website. 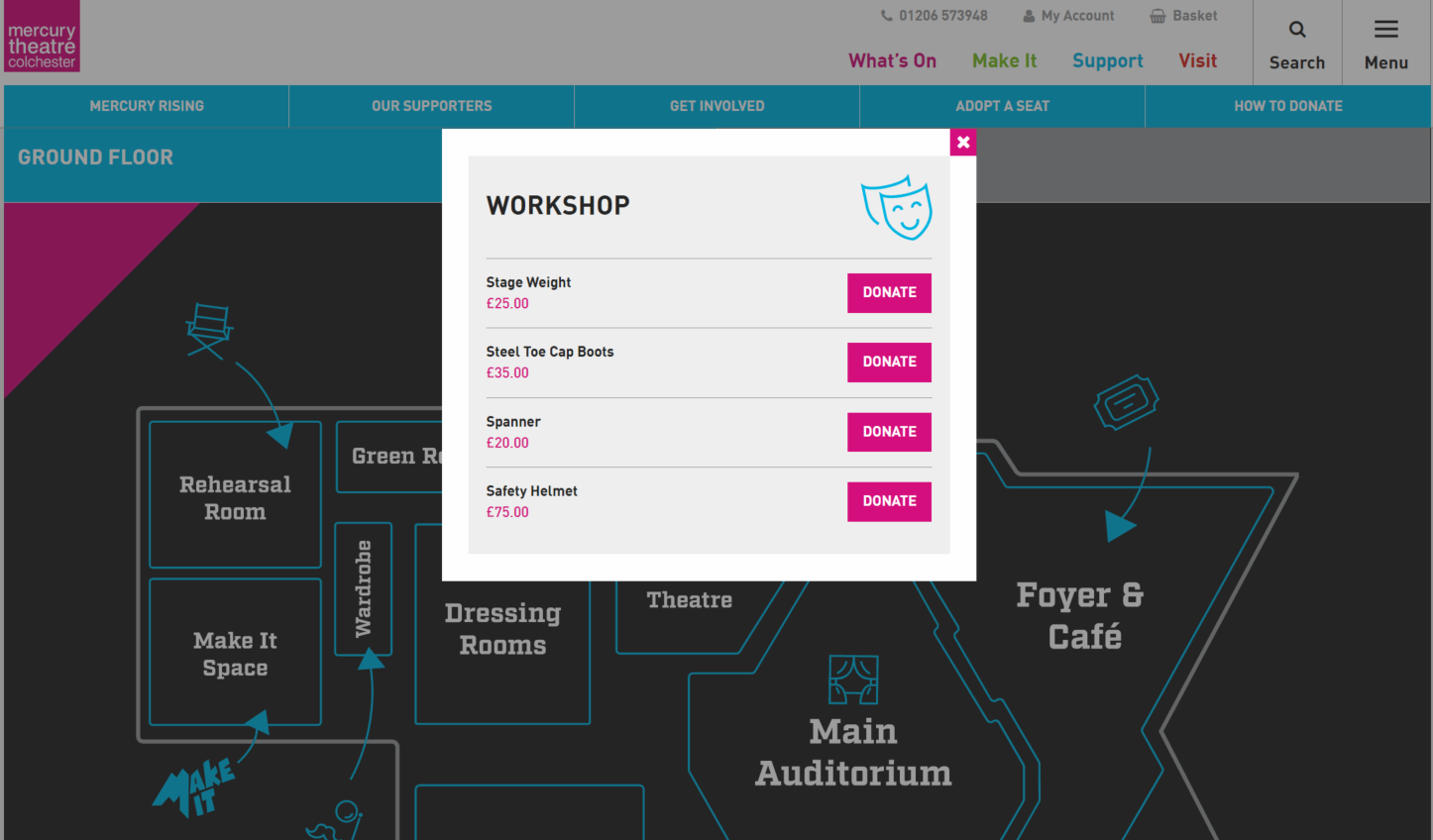 Again, donations towards the cost of these items are processed directly within Spektrix using the Donations iframe, but in this case they’ve made use of the ability to filter iframes. Once a customer hits the Donations page they only see the item(s) they chose, instead of a confusion of options.

Campaigns such as ‘Mercury Rising’ and ‘15 for 15’ encourage potential donors to actively engage with an organisation's plans, helping donors feel invested in that organisation's future and making them more likely to remain engaged.

Mindful that a donation should be just the start of a donor’s relationship with their organisation, Regent’s Park Open Air Theatre have done a wonderful job of configuring automated ‘Thank You’ emails, to be sent to donors in addition to their initial order confirmation.

A prompt and personalized “Thank You” goes a long way towards making a donor feel valued, and it helps frame their donation in relation to the organisation’s goals, without it feeling overly transactional. It’s also a great opportunity to establish rapport and clearly communicate your organisation’s character.

Regent’s Park have used Customer Lists in Spektrix to segment recent donors into separate categories based on criteria such as whether they’ve previously donated, whether they’re a member, and so on. Each category of donor will receive an appropriate message, sent via the dotdigital email integration using Scheduled Customer Lists. This avoids messages becoming too generic and impersonal, and benefits from being completely automated once the initial setup has been done.

Battersea Arts Centre have come up with a great way to draw their fundraising activity to customers’ attention, for people who may not have had time to fully browse their website, where there is a fantastic ‘Support’ section. In keeping with their wish to move away from the traditional method of ‘Will Call’ ticket collection, they’ve been eager adopters of Print at Home tickets, allowing customers to have their tickets sent out via e-mail.

They’ve used this feature to not only provide additional information about the venue and the facilities available during their customers’ visits, but also to highlight some of the current options for people to get involved and support the venue. Spektrix allows you to upload as many different Print at Home templates as you need, so you have the option to call out different information depending on which event or performance a customer has booked for. 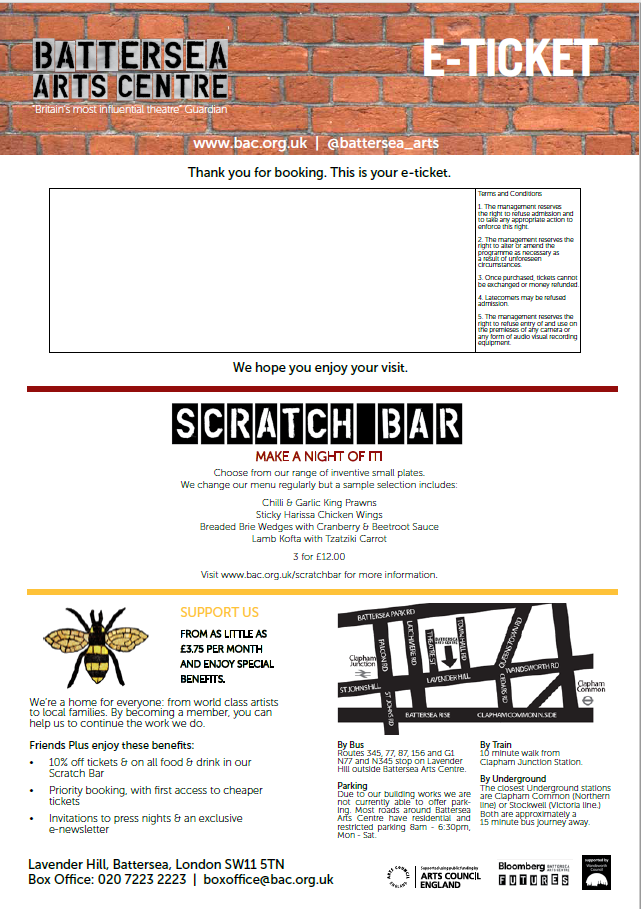 These are just a handful of ideas for great ways to organise and manage your fundraising, and touch on just a few of the ways in which Spektrix can help. Whatever you choose to do, the key thing is to be focusing on the ways in which you can communicate with your customers and donors, ensuring you’re able to build a strong base of long-term fans and supporters. In light of today’s changing fundraising landscape, this is ever more vital for arts organisations in order to survive.

We’d love to hear about any other creative ways you’ve found to aid your fundraising and development work. If you’ve got a great example, let us know below.

Edward Reeve is a former member of the Spektrix team