What Does Beyoncé Know About Pricing in the Arts?

What can Beyoncé tell us about pricing strategies in the arts? Image credit: Digital Spy.

For too long, pricing in arts organisations has worked like this: the box office and the programming team will get together to determine the cost of tickets to the show. The calculation behind prices is usually cost-based i.e. it covers all the costs of putting on the show and includes a fixed profit percentage. By and large, this works fine but it’s not brilliant. Brilliant pricing asks for the right amount of money in the right way and captures the maximum amount of revenue as a result.

Enter Beyoncé. A year after she released her self-titled album, she has only just allowed Spotify to stream her album to its users. Why? Simply because Beyoncé understands the value of what she’s selling and the amount of money that users pay for her album on Spotify is much lower than what she gets for mp3 downloads.

The best bit is that her fans don’t mind. Beyoncé has raked in more money by doing this and has generated tons of excitement around what she’s selling. Pretty impressive in a world where it’s extremely difficult to control the flow of creative content online.  The same goes for Taylor Swift who has pulled her new album from Spotify because she believes artists should value their art and make sure that people are paying enough money for it.

By contrast, the UK arts sector constantly seems to be undervaluing the worth of its art. Have you ever thought that maybe your pricing is based on the assumption that audiences don’t value the arts and are doing you a favour by buying a ticket? And that maybe this subconsciously tells your audience they shouldn’t be interested in your venue?

This is where marketing teams need to come in and become a part of the pricing conversation. And in case you were thinking that comparing the pricing strategy of the UK arts sector to the business empire of an internationally famous megastar is a tad unfair, here are some other examples of industries who know the value of what they’re selling and who capitalise on it by asking for the right amount of money and asking for it in the right way:

Restaurants optimise pricing on menus based on psychology
Balthazar restaurant uses tactical pricing combined with visual cues to direct you towards certain menu choices. For example, they draw attention to unpopular dishes with a high profit margin by surrounding them in a fancy-looking border, like the cheese plate at the bottom of the menu. They also position expensive dishes next to even more expensive dishes to make prices appear more reasonable (a tactic known as ‘anchoring’). Without even realising, their customers make choices based on constructed desires and beliefs about what they’re looking at. Read a little bit more about Balthazar's menu mind games here. 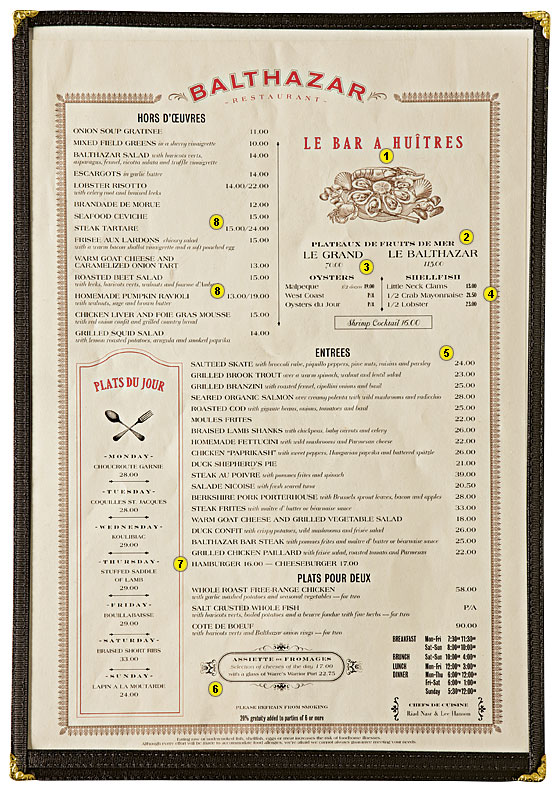 The Balthazar restaurant menu uses a few tactical tricks to draw your eye to options with a high profit margin. Image credit: nymag.com

Airlines price their plane tickets in accordance with market demand
Dynamically priced plane tickets are a classic example of pricing which has been designed to reflect the demands of the market. At the Spektrix Conference, we heard from Áine McVerry of the MAC Belfast on their experiments with dynamic pricing for their tickets. Although customer backlash is a frequently cited fear, not one customer of the MAC Belfast noticed it was going on. Dynamic pricing is a great way to make sure you’re not selling the work of your organisation short. Check out Paul’s blog post on how to do dynamic pricing effectively here.

The publishing industry staggers book releases to get the big bucks
Publishers release hardbacks first for the ‘strong’ consumers who are happy to pay a bit more money. A year later, the paperback books come out which ensures that sales of paperbacks don’t cannibalise more expensive hardback sales. A move known as ‘windowing’, it’s pretty starkly calculated to make more money (particularly important for publishing when it was formerly subject to strict market regulation). However, it’s one that’s been going on for decades and which consumers don’t mind at all. In the same way, the arts should make sure they’re not cannibalising the sales of their tickets with offers and other pricing strategies which lower prices.

The West End tiers its prices to offer something for everyone
'The Book of Mormon' is a well known example of a production which caters to the wide range of spending habits of their target audience. At the time of writing, premium tickets were on sale for £202.25 and went down to £39.75 for regular seats. Such a wide range of ticket prices caters both to the travel trade and high value tourists who buy top tier tickets via concierges and to the general West End market (i.e. price savvy local consumers and well-planned tourists) who likely buy the bottom tier. Not only are they appealing to the widest possible range of audience types and avoiding undervaluing the worth of their premium seats, but it works as an effective ‘anchoring’ technique. A similar strategy in your venue doesn’t need to be quite so extreme but you should definitely ask yourself if you’re undervaluing your best seats when you sell them beneath the market demand.

Joanne Stewart is a former member of the Spektrix team