How to Create Arts Marketing Campaigns That Drive Up Retention 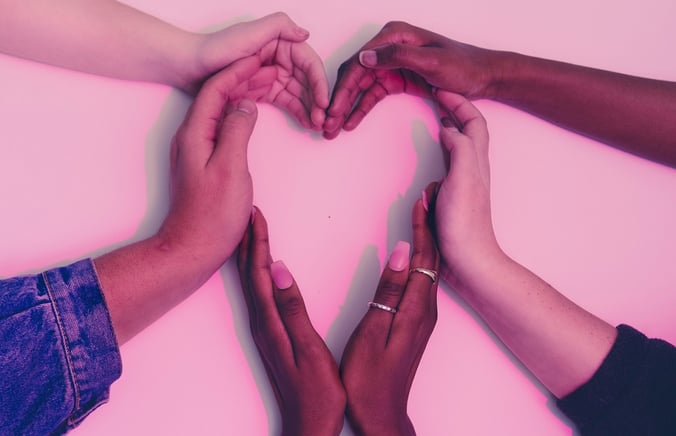 Think back to last season. Chances are a good portion of the organisation’s marketing budget and staff time went toward bringing new patrons — if not most of it. In the resource-defying world that is arts marketing, organisations often emphasize attracting new ticket buyers, and they are good at it.

But what happens to those people after they attend their first season, once they’re no longer new? They are already engaged and listening. So why do so many organisations dedicate fewer resources to getting those patrons to return, attend more performances, and build more patron loyalty over time?

In 2018, 56% of patrons were first-timers, but only 31% of patrons who booked the previous year returned the following season. (This varied, of course, by genre, as illustrated in the chart below.) 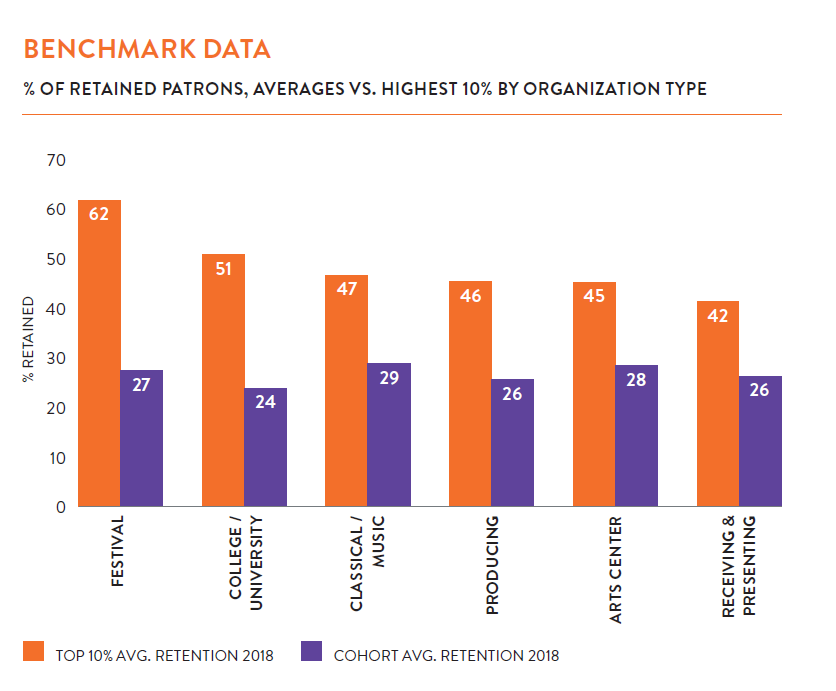 Considering that the 56% of patrons already know a little about what the organisation has to offer, why is there such a gap to cover in getting that cohort to come back year after year?

Here are some considerations for arts marketers to make when they revisit their retention efforts. The insights in this article have all been informed by strategies from organisations that lead the pack on retention. By developing a clear understanding of the patron loyalty stages, tracking the right patron information and using it to craft targeted communications strategies, arts marketers can drive change at their organisation and increase ROI from their retention campaigns.

organisations that prioritize retention out-perform the averages by almost double, bringing in upwards of 50% of returning patrons, according to a study of 350 arts organisations in the U.S., Canada and the U.K. When surveyed, the bulk of these successful organisations said their retention work starts from a common place: defining the patron loyalty stages.

These exact definitions vary based on the institution, but having a clear framework for how they are building loyalty with their audience that’s consistent across the whole organisation is essential for retaining patrons. 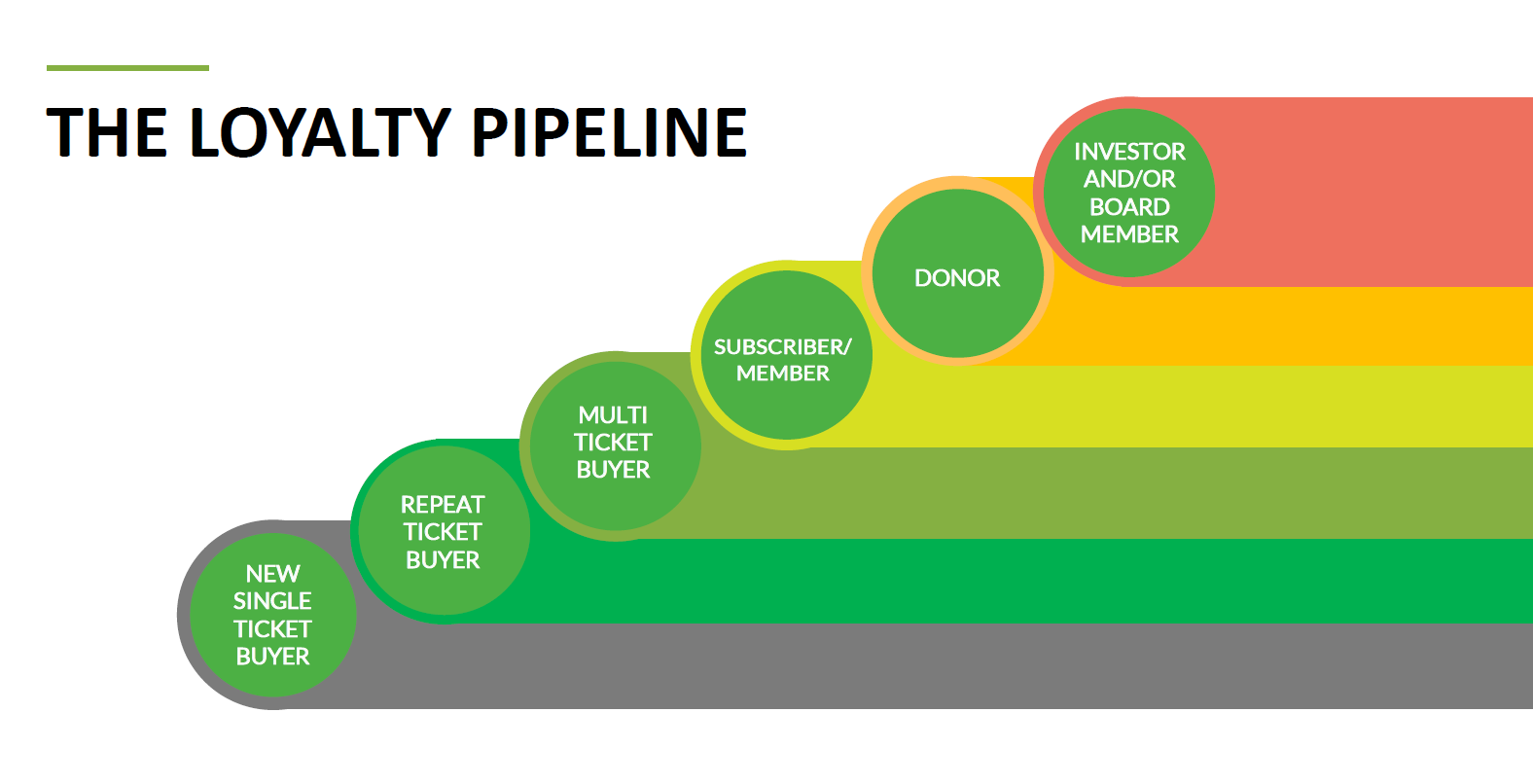 Here’s one example that outlines loyalty in the following stages:

New single ticket buyer: First-time patrons who have completed their first interaction with the organisation.

Repeat ticket buyer: Patrons whose first experience (and any communications outside of that) prompted them to make a second visit.

Multi-ticket buyers: Patrons who are starting to become invested in the organisation and buy tickets for themselves and others.

Subscriber/member: Patrons who have committed to regularly seeing an organisation’s offerings by buying into their loyalty program (subscription, multi-show package, or however that may work at the organisation).

Donor: Patrons who have taken the next step to support the organisation via charitable giving (and the range of donor stages involved in that).

As patrons in the loyalty pipeline move toward donor and investor, the organisation’s relationships to those patrons grows deeper and the amount of revenue from each patron grows. At the same time, the cost for the organisation to retain those patrons decreases: They are already invested and the established loyalty gives them an intrinsic drive to support the organisation.

The data that arts marketers should track

Defined loyalty stages serve as the outline for the next step in building retention: Pinpointing what behaviours make patrons fit into each stage. Tracking and analyzing patron data lays the groundwork for creating a segmented CRM strategy to communicate with patrons and move them up the loyalty ladder.

Arts marketers should track patron details that go beyond demographics; that only gets them so far when it comes to loyalty. Instead, they should look at ways to track patrons’ behaviour, which can inform them on patrons’ shared interests and needs.

While it might not be possible to track all of these details, working to capture more context on how patrons interact with the organisation is key to grouping patrons based on similar behaviours. This, paired with the organisation’s loyalty framework, is key to building targeted communications that engage each patron group and work to move them to the next loyalty level. It also lays the groundwork for identifying the behaviours that help nurture a new ticket buyer into a repeat buyer. Marketers should report on each group to identify trends that emerge when they convert to a higher loyalty level, i.e. after attending certain programming or receiving certain communications.

With an understanding of their organisation’s loyalty stages and the behaviours that link patrons to those stages, arts marketers can execute their segmentation strategy and create a communications plan for engaging those patrons.

In order to capture and segment on all of the necessary patron behaviour details, arts organisations should work out of a single database. Having a single customer view where all of a patrons’ actions are recorded in once place allows arts organisation to create granular, tailored massaging. It also allows organisations to track their campaigns’ success.

For example, an organisation might have a season goal to move more multi-ticket buyers into the member category. They decide to create a campaign targeted toward multi-ticket buyers encouraging them to try out a membership by offering them a discount on their first membership. To segment these patrons, the organisation would need to be able to record which shows patrons had attended throughout their history with the organisation and whether they had purchased a membership before. It also would be helpful to know whether they had ever donated, because those patrons might call for different messaging.

After segmenting out that patron group and developing fitting messaging for them, the organisation can send the campaign along its way. It would then want to run reports on that patron group to see how many converted to members throughout a given period. From there, they would want to segment (A) their new members and (B) people in the targeted group who did not redeem the membership offer. For group A, the organisation could develop messages that thank and later prompt them to buy a full membership next season. For group B, arts marketers could resend the offer email to see if the reminder prompts them to act. Patrons who are still not responsive, can be re-categorized as single ticket buyers.

To do this, arts organisations need to be able to track purchases across ticketing, memberships and donations as well as offer redemption, and all of these behaviours need to dynamically update into the same record with every new patron transaction. They also need to track how patrons respond to email marketing and to run reports on these behaviours.

Having a single customer view allows for effective segmentation because it takes the full range of patrons’ behaviour into account and helps organisations respond to them with the appropriate messaging, creating the best chance possible for them to engage and build loyalty.

Because loyalty can look for different from organisation to organisation, there is no one way to build a successful retention strategy. organisations can channel the building blocks of defining loyalty stages, tracking patron data and segmenting into finding what approaches work for them and their patrons.

Here is how one organisation did exactly that: Ensemble Theatre in Cincinnati, OH started their retention efforts when they opened in 1986 to compel patrons to return to their Over-the-Rhine neighborhood. Now, they have expanded their retention focus to accommodate the digital-driven ways their current audiences book tickets and donate.

Ensemble Theatre defined their loyalty stages by developing a patron loyalty map to serve as a visual tracker for the staff as they work to move audience members from ticket buyers to reattenders and then subscribers. They collect a full range of patron information and segment patrons based on their attendance in a given time frame. They encourage reattendance with targeted, generous, and timely offers to upcoming shows. They then move patrons who have attended multiple times up the loyalty ladder and repeat the process, this time targeting them as potential subscribers.

Having the ability to track all of their patrons’ behaviours in a single view has been central to creating this digital-first approach to loyalty, said Jocelyn Meyer, Ensemble Theatre’s Director of Marketing and Communications.

“The vast majority of our strategies surrounding audience retention have been made possible by using technology which allows us to segment, track and action our plans. An integrated email platform has had a major impact on audience loyalty,” Meyer said.

To read more about the techniques arts organisations are leveraging to increase retention, download Chapter 1 of the 2019 Insights Report: Uncover How Patron Loyalty Accelerates Growth